WHAT'S COOKING: FREE SHIPPING on all orders over $100 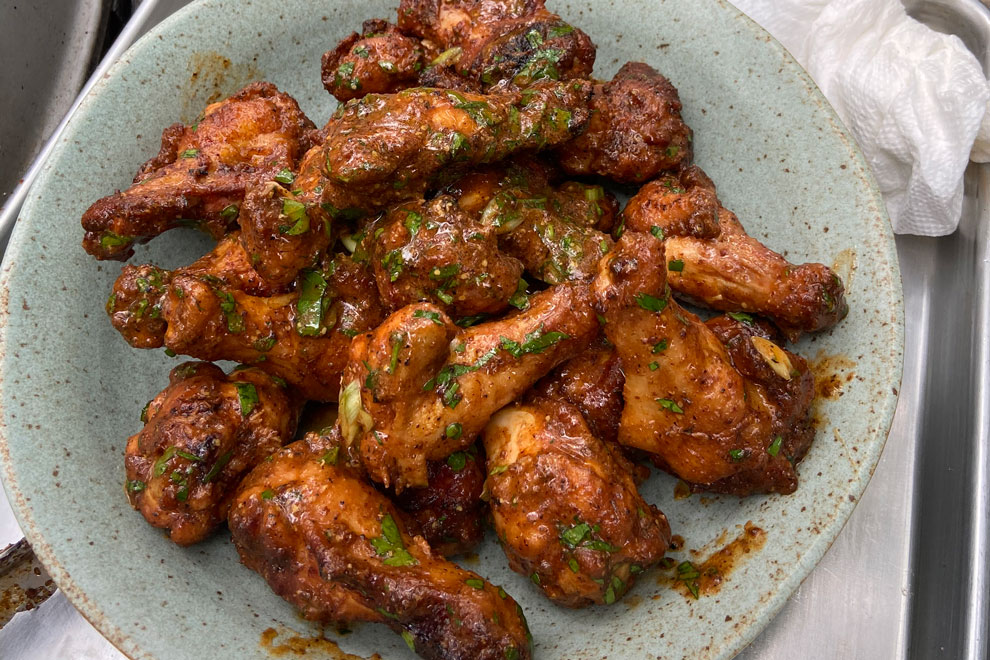 Paula: This morning while navigating Austin traffic, I used the classical station to calm nerves and heard “Impromptu in Two Keys” by George Gershwin. It occurred to me that the title describes my approach to this recipe. That may be a high brow approach to chicken wings but bear with me.

Scott: That’s weird because I was listening to “Learning to Fly” by Tom Petty during my commute and that song is also clearly about a plaintive longing for the comfort of chicken wings.

Paula: Which makes me wonder, if you’re hungry are all songs about food? Are crispy, saucy wings a subliminal cultural whisper? If you play a record backwards, would you hear, “belly needs wings?” If this conspiracy theory is true, I have two gifts. First, the best Cajun-spiced wings ever (so authentically fiery, they might inspire a marriage proposal in Breaux Bridge). Second, the perfect snack to feed family and friends when they’re waiting on the turkey (that you THOUGHT was defrosted), and the natives are getting restless.

Scott: Wow. Quite a bit to unpack there. Let’s get back to this Gershwin commute and how it inspires you to create delicious chicken recipes.

Paula: The breakdown of my “two keys?” First coating the wings with Cajun seasoning (and a pinch of baking powder, which will ultimately help them crisp on the grill). This step can be done a day in advance, or 30 minutes before grilling. After the wings are grilled they’re tossed in a buttery hot sauce spiked with Creole mustard and Maggi seasoning that balances the heat with umami muscle.

Prepare your PK grill for two-zone cooking, and build a medium-high fire. While the grill heats, prep the chicken: Pat the drumettes dry with paper towels, place them in a large bowl and drizzle with enough olive oil to lightly coat, sprinkle with baking powder and Chicka Licka Bam Bam, and then use your hands to toss the mixture until the chicken is evenly coated.

When the coals are glowing red and covered with a fine gray ash, use tongs to place the drumettes over indirect heat. Close the grill and cook, turning and rotating around the heat as needed, until the wings are golden and crisp and the chicken is cooked through.

While the chicken cooks, make the sauce. Melt the butter and allow it to cool briefly, and then whisk in the hot sauce, mustard, and Maggi seasoning.

Pour the sauce into a large bowl, and then add the hot, cooked wings. Use two rubber spatulas or spoons to toss the wings vigorously, until the wings are thoroughly coated with sauce, and then transfer to a platter, top with parsley and scallions, and serve immediately--with plenty of beer and napkins.